Autoprop in feathered modeSailing. The feathered image on the right shows how, when sailing, Autoprop reduces drag by up to 85% compared with a three blade fixed propeller; with the two blade propeller the reduction can be even greater. This drag reduction can equate to as much as one additional knot in sailing speed.

Motor Sailing. Autoprop automatically varies its pitch depending on the conditions. Put simply, as the wind or sea conditions vary so does the blade pitch of your Autoprop. The less pressure the Autoprop feels on its blades the more pitch is applied and vice versa. The result is maximum efficiency whatever the conditions, with increased speeds at lower engine revs and lower fuel consumption and emissions.Autoprop in ahead modeMotoring. With other feathering and fixed pitch propellers performance under engine is a compromise. No such compromise exists with Autoprop, her blades admittedly rather an odd shape, are the result of a huge investment in design time and testing. The Autoprop blades, unlike those of conventional propellers, maximise the thrust delivered whatever rpm the yachts engine is running at. Conventional propellers are designed to provide maximum thrust at the engines maximum output; at any other point up to maximum revs the propeller will be operating at less than its potential. Autoprop however, subtly varies its pitch to optimise thrust whatever the engine's revolutions.Manoeuvrability. In reverse the Autoprop blades swing through 180 degrees and present exactly the same blade shape as they do ahead. The result, the same excellent thrust, with greater stopping power and less prop walk.Autoprop in astern mode

Adverse weather conditions. Likewise in adverse weather conditions, the vessel’s speed will be reduced because of the adverse weather such as high winds and choppy sea conditions. The Autoprop senses the load acting upon it and reduces the pitch angle allowing the engine to to run to a higher maximum rpm. Much like travelling up a hill in your car, you need a lower gear ratio to allow the engine to run faster and produce more power.Towing.This unique feature of the Autoprop, enables the full power of the engine to be used in situations such as towing, or in emergencies. With conventional propellers because the pitch is too coarse at very low speeds, the engine cannot achieve its full revolutions and therefore full thrust is not achievable. 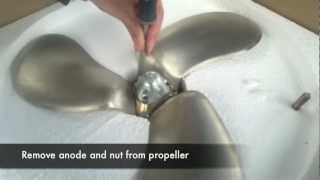